“Why you?” I asked Kevin White one cold March morning over a headset in Starbucks, “I know that providing affordable eye care to impoverished people is a good thing for someone to do. But, why is it what you choose to do when you could do so many other things?” He paused. I tried to embrace the silence, as I heard that sometimes after silence you get the most insightful information. “Well,” he finally said, “I really don’t know. I guess it is sort of an obsession of mine.” This was followed by a little bit of a laugh, and a look to another corner of the room. “My wife agrees with me,” he added. 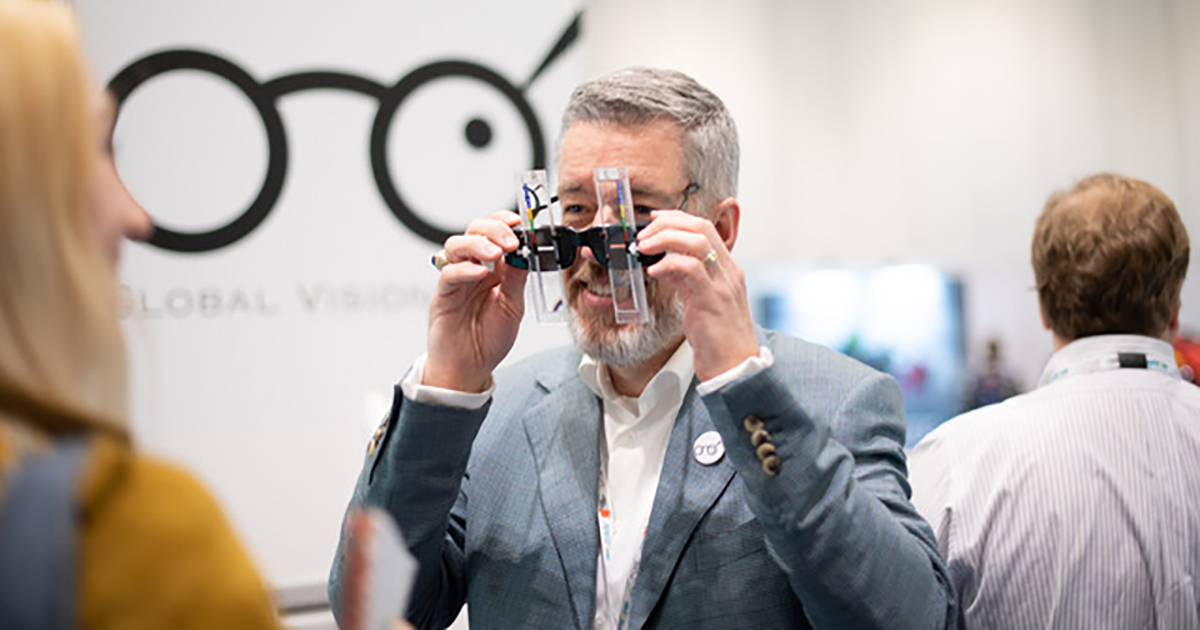 Global Vision 2020 is a nonprofit that Kevin White founded in 2009. Their main goal is to provide inexpensive and effective eyeglasses to people in impoverished countries. Recently they have had a tremendous amount of success, recognition, and funding, but it was not always that way. Kevin worked through challenge after challenge, constantly striving for improvement. And, although he has already reached certain levels of success, he is far from finished with his work.

It all began in 2005 when Kevin had a criticism of the way the military outreach provided eyeglasses in Morocco. They used expensive technology like auto refractors. The readings from these tests were often inaccurate and left people with worse than 2020 vision in both eyes. Also, the way they provided the lenses was very inefficient, as they arrived with premade lenses that would hopefully match someone’s prescription. But, people began picking out the glasses because of the way they looked and not because of the prescription. So, when the military brought a thousand pairs of eyeglasses to Mozambique in 2005, they were only able to give away one hundred. The other eight to nine-hundred they had to throw away.

So, when Kevin left the military in 2009, he started perusing a better method of delivering glasses. He began by passing on fluid-filled glasses. As he explained the way these lenses worked, he reached into his desk and pulled out a pair to demonstrate. They were incredibly ugly. Thick round frames surrounded murky, thick lenses, and had syringes on both sides, which put liquid into the lenses. As the fluid enters the lens, it changes its to allow it to fit the individual’s prescription. But, in addition to being unattractive, each pair of these fluid-filled glasses were twenty-five euros. Nevertheless, he gave pairs to infantrymen to give out in North Africa during their tours. Kevin himself also passed out a few of these. They were much more efficient than the service provided by the military, but they still left a lot to be desired. They were a bit too expensive, ugly, and complicated. He did not get very much support for them and was not satisfied. He knew that he had to simplify the process.

So, he went back to the drawing board. After realizing that the design for this new method had to come from his plan, rather than other more qualified experts, as it became clear that it was something he wanted more than others. So, he designed a lens and testing system that one of his friends was able to produce for him. It worked extremely well. It was simple, inexpensive, and almost anyone could use it. 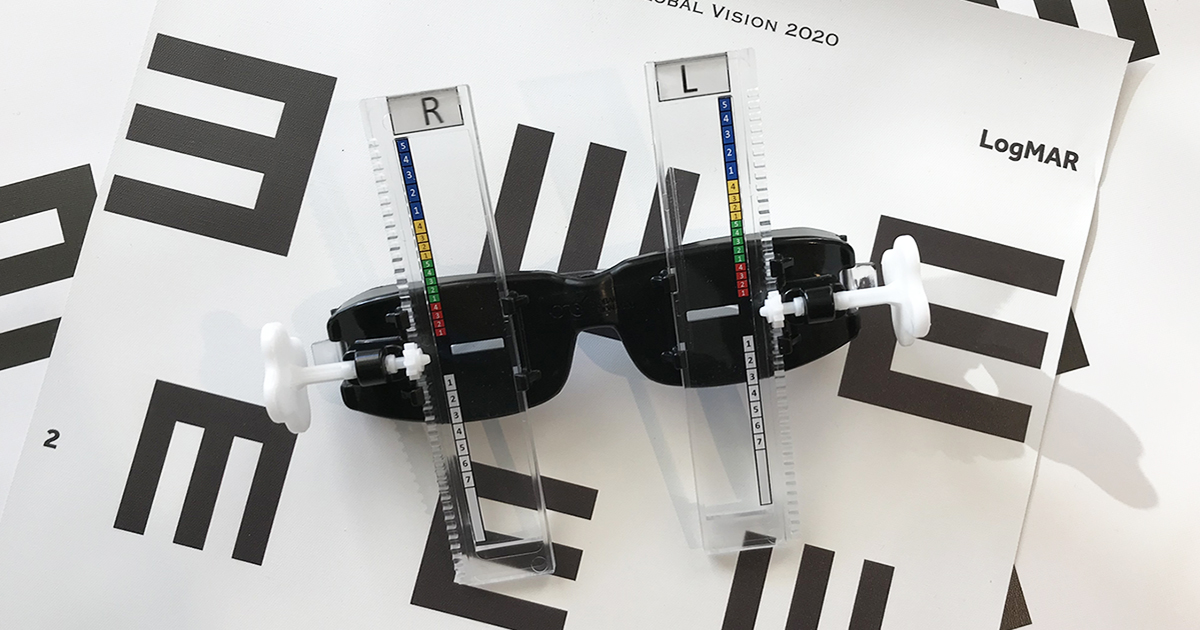 The process that he designed has been termed “Dial, Snap, Wear.” The first step is to use the Usee™ tool, which you hold up to your eyes and look at an E chart. Kevin held one up during my interview to show me how universal the process is. The tool is a simple pair of dark glasses with a nob on either side that allows the patient to adjust the lens to be most effective. The E chart is like a normal eye chart in that it has different size letters on the lines ranging from very large to very small. However, it does not have a typical alphabet. The chart is composed exclusively of E’s facing different directions. So, the person taking the eye test simply has to mimic what they see with their fingers rather than be able to read an English alphabet. When you adjust the tool to a point that your vision is clear, you have your prescription. So, when you reach a point that you can read the lower lines on the E Chart, you match the color and number on the tool to a lens with the corresponding color and number. You then snap lenses into the appropriate frame and walk away wearing new glasses. This process is so simple that children can perform the test. There is immediate feedback on its accuracy, and people can walk away with the glasses five minutes after the test is finished. And, best of all, each pair costs only a few euros.

Global Vision has reached out to twenty countries, growing by the day. Mozambique was the first place he was able to try these new lenses. Because of a mutual connection, he was able to meet the minister of education who gave permission to distribute these lenses throughout schools in the area. This was the only outreach that Global Vision 2020 funded themselves. Other than that, individuals, churches, outreach groups, medical providers, and more buy lens kits and distribute them throughout the world.

When I asked Kevin if he had any favorite stories from his experience delivering his face lit up. “There are so many,’ he said, “How do I choose?” But, it did not take him long to settle on which story to tell. While most of his time delivering glasses is spent in schools, and he gets to see good vision change a perpetually failing student into one of the top in the class, he also mentioned that good vision affects all generations. With vision comes ability and power. When sight is restored in youth the children’s’ lives open up, and they are presented with more opportunity. When sight is restored to an older person, the power they lost is returned, and they are able to re-assume roles they had lost.

Kevin was in Rwanda early on in his Global Vision days. In one of his visits, he tested an old matron who spent her days sitting in a chair inside of their small hut and was taken care of by her children and grandchildren. When she had her eyes tested she scored very low. She got the proper lenses and was thrilled with what she could see inside her little hut. “But,” explained Mr. White, “I always liked to get them outside with their new lenses, so they can actually see the significance of the change in their vision.” So, he took the grandma outside with her granddaughter by her side. As the old lady looked around, a history and old life opened up, and the old lady saw the town of her youth. She pointed out places to her granddaughter as they looked across the rolling hills. “That is where your mother was born,” she pointed, “And there is the hill where your grandfather proposed,” and the stories went on and on. Her eyes watered. Kevin’s eyes watered.

A few days later a photographer went by the houses where the lenses had been delivered to follow up and ensure that the glasses were working well, and there were no issues, as well as take pictures. Mr. White told him to pay special attention to this lady and her situation. When he came back, Kevin asked: “So, how was it?” He responded, “things seemed good, she seemed to be getting around well.” This struck Kevin’s attention, as when he arrived she was being cared for and was very sedentary and helpless. He asked more. The photographer explained that she was directing everyone around, clearly in control of the household and the situation. Standing, walking, inside and out, she was the boss. Kevin was awe-struck. This same lady the day before was sitting in a corner, being cared for by her grandchildren, had now resumed the role of matron of the family. With her new vision, she was able to take her place again as head of the family, restore her confidence and situation. 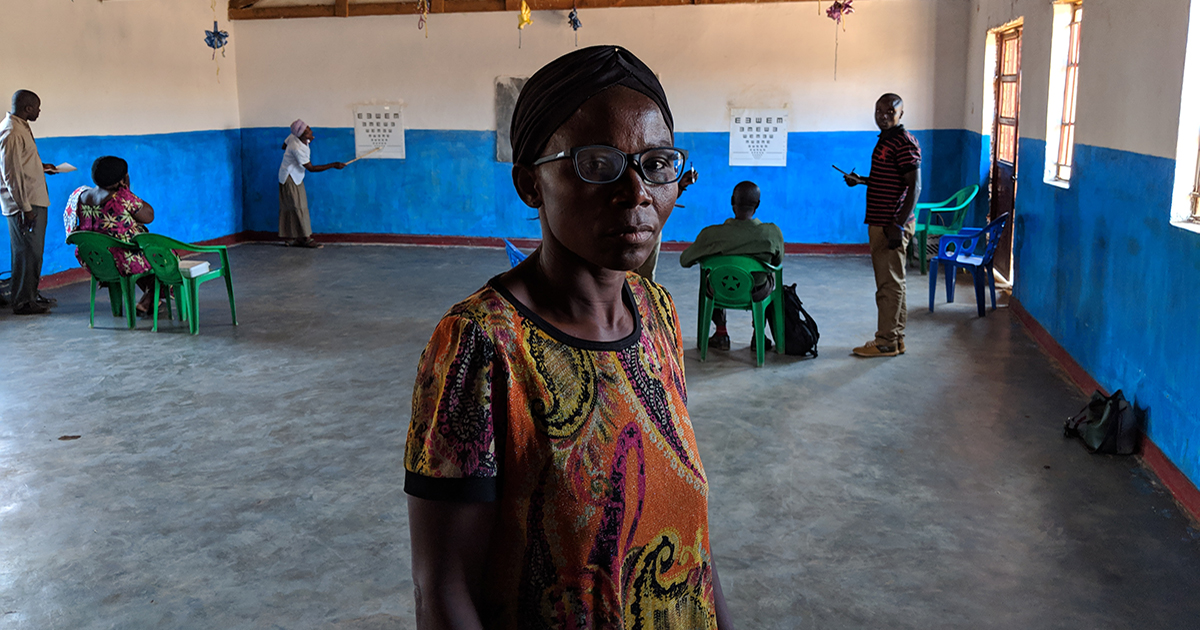 On Global Vision 2020’s website, they have their goal for growth from this point. In 2019 they want to spread their outreach even farther to change more lives. The website says, “$1.25 Million. 250,000 Eyeglasses. It’s bold. We’re determined. You’re vital.” Kevin’s goal is to spread this easy to use technology to more people in more impoverished communities. Among those communities he hopes to reach are Tanzania, Pakistan, Hati, Paraguay, and China. The way he hopes to attain this goal is through donations, partnerships, and spreading the word. But, when I asked Kevin what his goal is with his company, he painted a picture for me. He said, “I want to see these kits in a corner store all over the world.” He described a future in which all people have access to quality eye care, and where no one is held back because they can’t see.

When looking through his website, I came across a section of the page labeled “Faces.” Very simply, this is a collage of pictures of people wearing Global Vision 2020 glasses. Most of the people are young students. Some of the faces are old. A few of them are middle-aged. However, upon reflecting, it seems that despite what time in life these glasses were given to the individuals, it marks a point that changes their life. The children now can easily see, read the board in school, read their books, grow in confidence and ability. Their future is a bit brighter, and their goals a bit easier to attain. The middle-aged individuals will find relief in their constant tasks, and chores. Tasks will become a bit easier to undertake. Maybe they will acquire new energy and clarity with their new-found vision. The older faces will be able to see the things they have lived so long without seeing. They will be able to re-examine and appreciate the little things in life, that they have not seen for so long. They will be able to improve their life by just as much as their new “eyes” allow them to. Regardless of age, nationality, status, people who are given the chance at better vision have new hope and ability with which to improve other aspects of their lives. Kevin White helps to make this hope a reality.