It has been a very long seven weeks for our executive director, Kevin White. But as usual he takes it in stride. Not much rattles him, and he is, if nothing else, very persistent. On August 24th he departed for Vietnam and spent two weeks with the University of Hanoi Optometry Department. He observed while they collaborated with our advisor, Dr. Bruce Moore, on ways to best field trial the USee on children younger than twelve. The purpose is to identify a systematic way for children as young as seven to use the self-refraction approach of the USee to identify their prescription without overcorrection. As we learn more about that, we’ll keep you posted (but it will be several months). 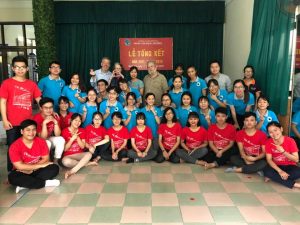 Following that, Kevin was met by our Director of Finance, Stephen Moody, in India for the International Agency for the Prevention of Blindness (IAPB) 2018 Conference. They were able to get settled for a day or two in preparation for a very busy two days as well as get a chance to visit the Taj Mahal. 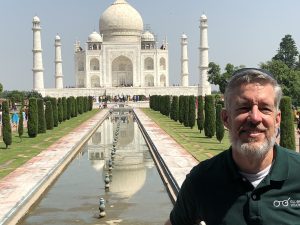 The IAPB was a great opportunity for Global Vision to build awareness. Meeting with EYElliance partners and other NGOs provided a platform to showcase the USee to hundreds of individuals very interested in preventing blindness throughout the world. It’s worth saying that about 75-80% of blindness can be prevented with a pair of eyeglasses. We know we have an answer for that!

After India they headed to South Africa for meetings with the University of Johannesburg and partnering organizations to discuss outreaches in the metropolitan area and beyond. Dr. Anthony Carlson and Kevin had worked together in Liberia years prior when Kevin was still dispensing liquid silicon eyeglasses. It was nice for them to reconnect and for discussions of bringing the USee to South Africa to begin. 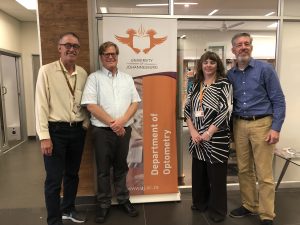 From South Africa Stephen and Kevin headed to Nairobi where they were met by Catherine Baker our International Program Coordinator. The three attended the MEDIC East Africa conference to build partnerships with potential distributors and partners in the region. There, they also continued conversations with EYElliance partners already in the region. We are currently drawing up the details to streamline the products and services both organizations offer to make the best of our in-field outreaches.

And lastly, as Stephen returned to the States, Kevin and Catherine headed to the UK for the Medical Innovations Conference led by the Defence Medical Services. This is a great opportunity. Militaries around the world play an important role in Humanitarian Assistance and Disaster Relief. Currently, as Kevin and Catherine are illustrating the USee’s capabilities they are receiving great feedback for partnering. Clearly people need eyeglasses in low resource nations, but when disaster strikes people may lose their eyeglasses and a relief team that comes in should be able to provide people with the basic need of eyeglasses.

Although it has been seven weeks away from his home, Kevin is excited about the prospects that have come from this worldwide trip. We, as a staff, are geared up and ready to go. We have USees in line for production and partners in line for distribution. It’s going to be a fantastic 4th quarter of 2018! #dialsnapwear