Easton, MD – At the Center of Ending the Global Epidemic of Poor Vision 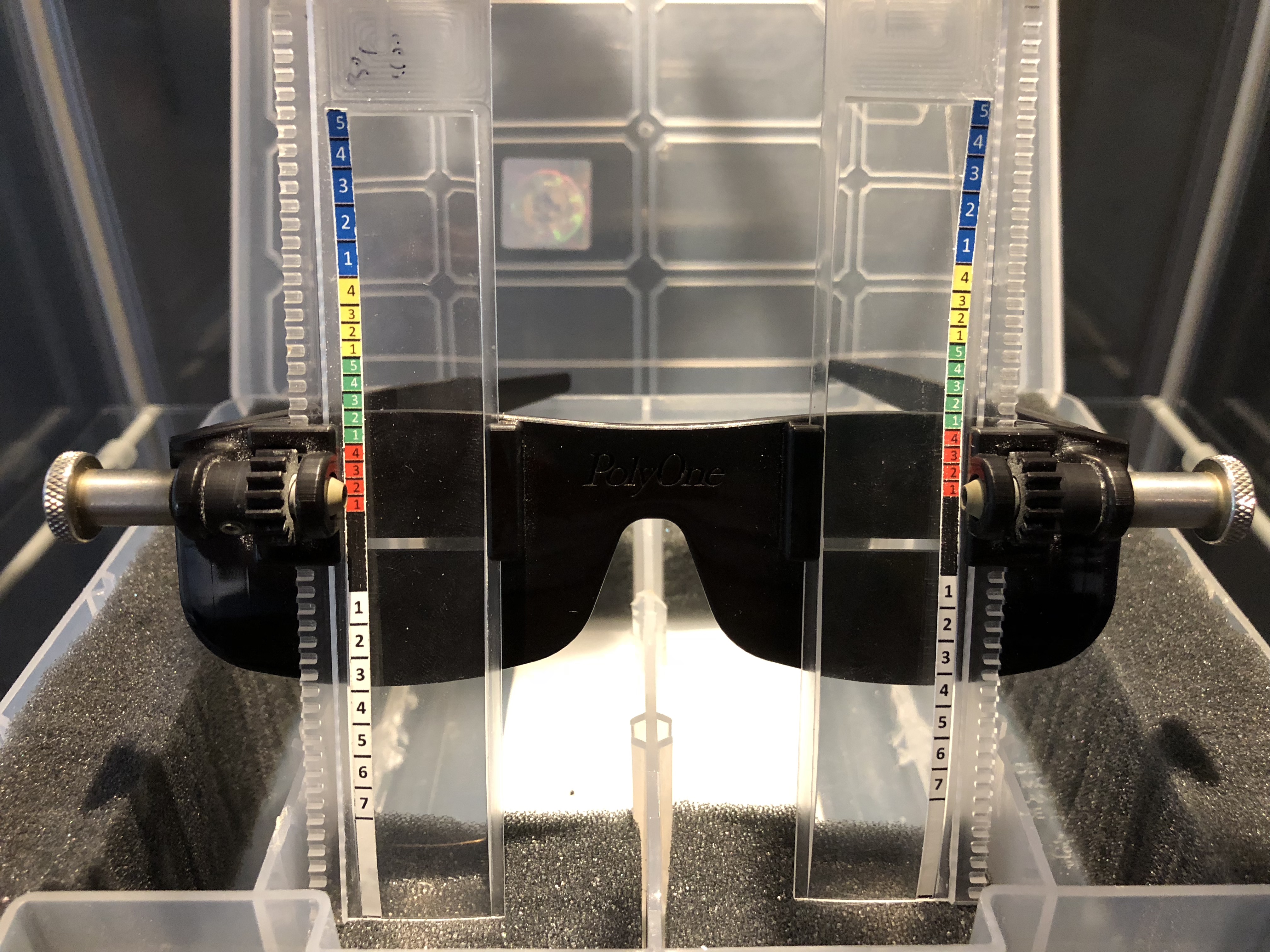 It never fails. And it goes something like this: “Right here? In Easton?”

Yes. Right here in Easton, MD. Not New York, London or Delhi. Here in the County seat of bucolic Talbot County MD about ninety minutes away from our Nation’s capitol, and light years away from the hustle and bustle of the hectic world, are the headquarters of Global Vision 2020. An organization dedicated to end the epidemic of bad vision worldwide.

Some ask how it is Global Vision 2020’s headquarters landed here. Simple. When Kevin was assigned to the DC area for his final duty station as a U.S. Marine, he and his family decided they did not want to settle in the Beltway area. They chose Easton, MD instead. A town well known to Rebecca because of her early childhood spent in St. Michaels. Kevin was a ‘weekend’ dad for those last two years and their young children enjoyed the type of childhood in a neighborhood we are all quite nostalgic for now.

Upon making a home here, Easton became the natural place to start Global Vision 2020. Yet with such a lofty goal to end a worldwide epidemic it does catch people off guard that such an organization is located in the heart of a small town on the eastern shore of Maryland. But it couldn’t have worked out better. The benefits of ‘knowing everyone’ go far beyond the networking that can be generic in large cities. So many people that have come to know Global Vision and play a role in our success were brought to us by others saying, “Do you know?” or “You need to meet” or “I know just the person you need to talk to.”

And our local community support has been and will continue to be amplified by a powerhouse Maryland Institution. Johns Hopkins University’s Carey Business School, where Kevin earned his MBA just recently, and the JHU Wilmer Eye Institute have provided a breadth of information, scientific research and global reach pivotal to Global Vision’s success.

Closer to home the community has rallied behind the Global Vision dream and continues to highlight us in local news, share our success stories far beyond the borders of our County, State or Country, and continues to show up to volunteer as needed.

As lucky as we are to have a fantastic place to be, with a genuinely committed community of support, our story does begin overseas and has some very fun highlights.

In 2005 Kevin went on his first humanitarian outreach with the DoD. He immediately saw the need for improvement when it came to eyeglasses distribution. There was too much waste, people didn’t get the Rx they needed in both eyes, and the implementation model included highly trained optometrists or ophthalmic health care workers. In his search for an easier more efficient way to deliver vision he found Dr. Joshua Silver and his liquid silicon eyeglasses. (read more about Josh here: https://en.wikipedia.org/wiki/Joshua_Silver)

As the Humanitarian Assistance Officer at Eucom between 2004 through 2007, Kevin committed to making vision a reality for his area of operation of Eastern Europe and Africa. The DoD delivered upwards of 40,000 pairs of eyeglasses in three years.

Upon retirement from the USMC, Global Vision was born, and noted in this New York Times article about non-conventional eyeglasses being delivered by a handful of organizations. At the time, Global Vision 2020 was delivering eyeglasses through small outreaches (mostly faith based) and product agnostic, yet as you can read, understood the limitations of both fluid filled and Alvarez glasses. https://www.nytimes.com/2010/01/02/business/global/02glasses.html 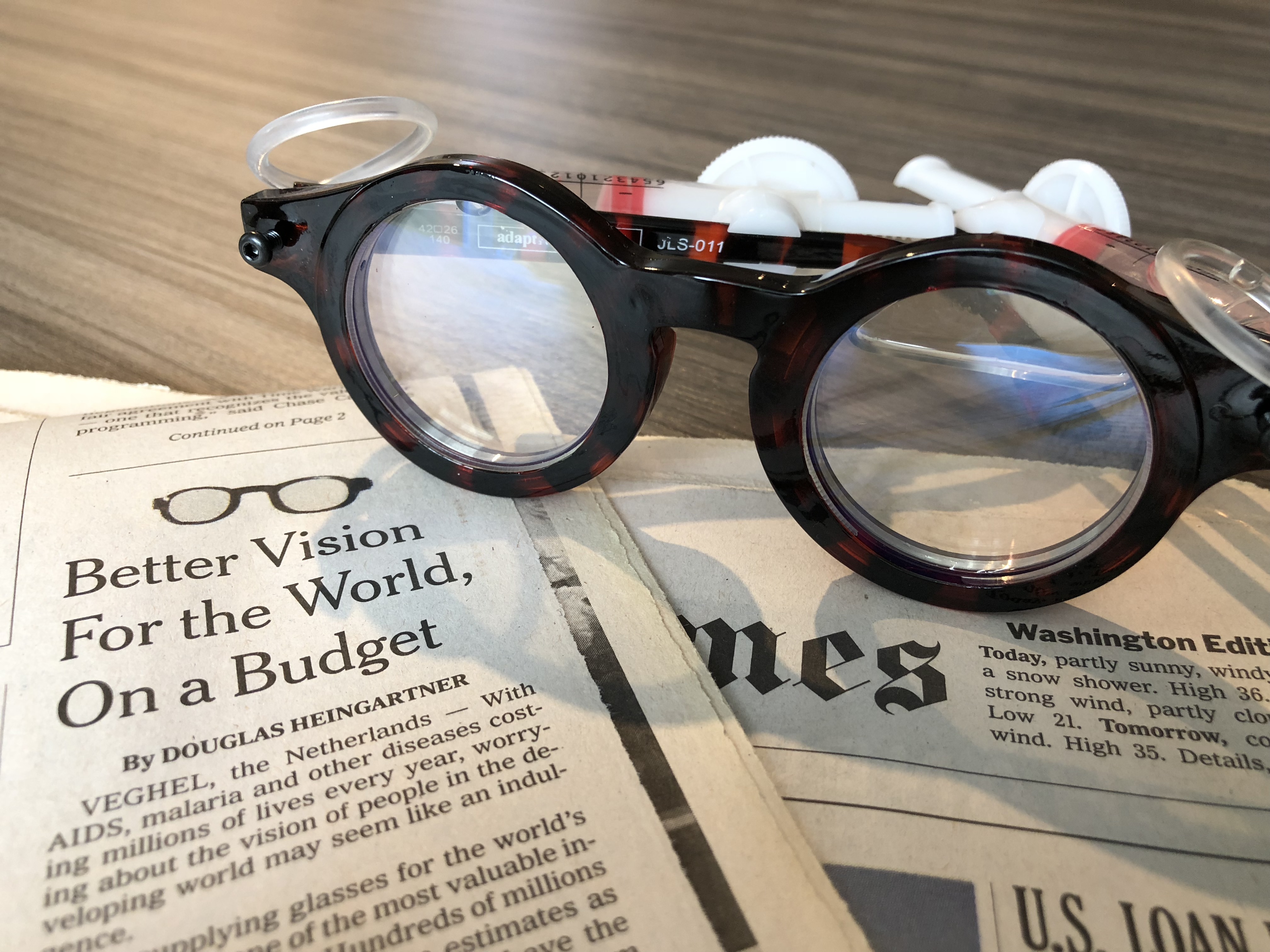 Regardless, the technology behind the idea, whether liquid silicon or Alvarez lenses, have been game changers. The ability to lower the educational threshold for the safe and efficacious delivery of prescription eyeglasses is what makes ending the epidemic possible. Although Dr. Silver began working on the idea of self refraction in the mid-1980s it wasn’t until the end of the first decade in 2000 that he began receiving recognition.

In 2010, the program for the National Design Triennial WHY DESIGN NOW at the Smithsonian’s Cooper Hewitt National Design Museum featured a photo taken by Kevin at a Global Vision implementation with Josh’s eyeglasses. 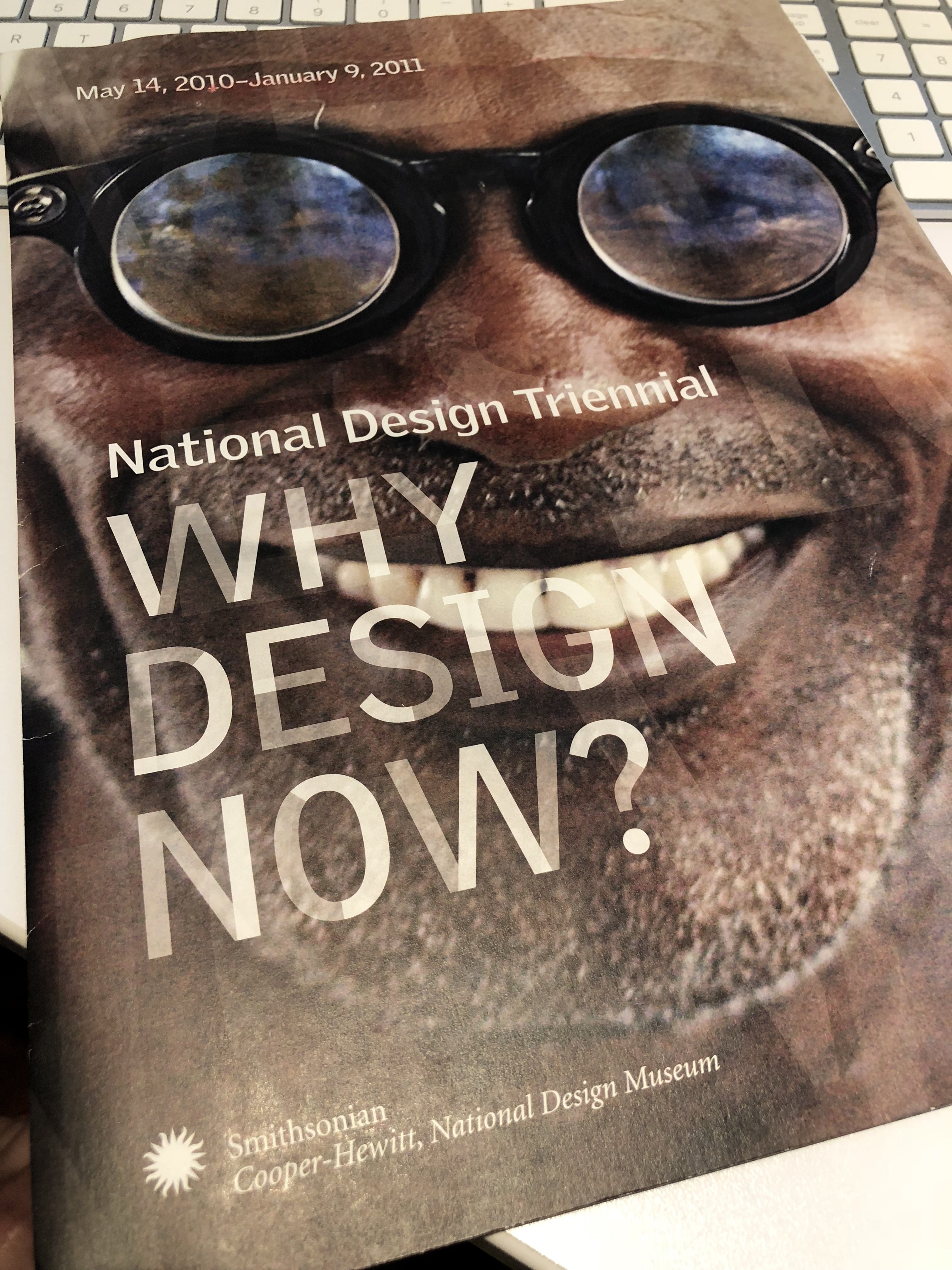 And the invention was an Editor’s Pick in the Smithsonian Magazine in May of 2010. 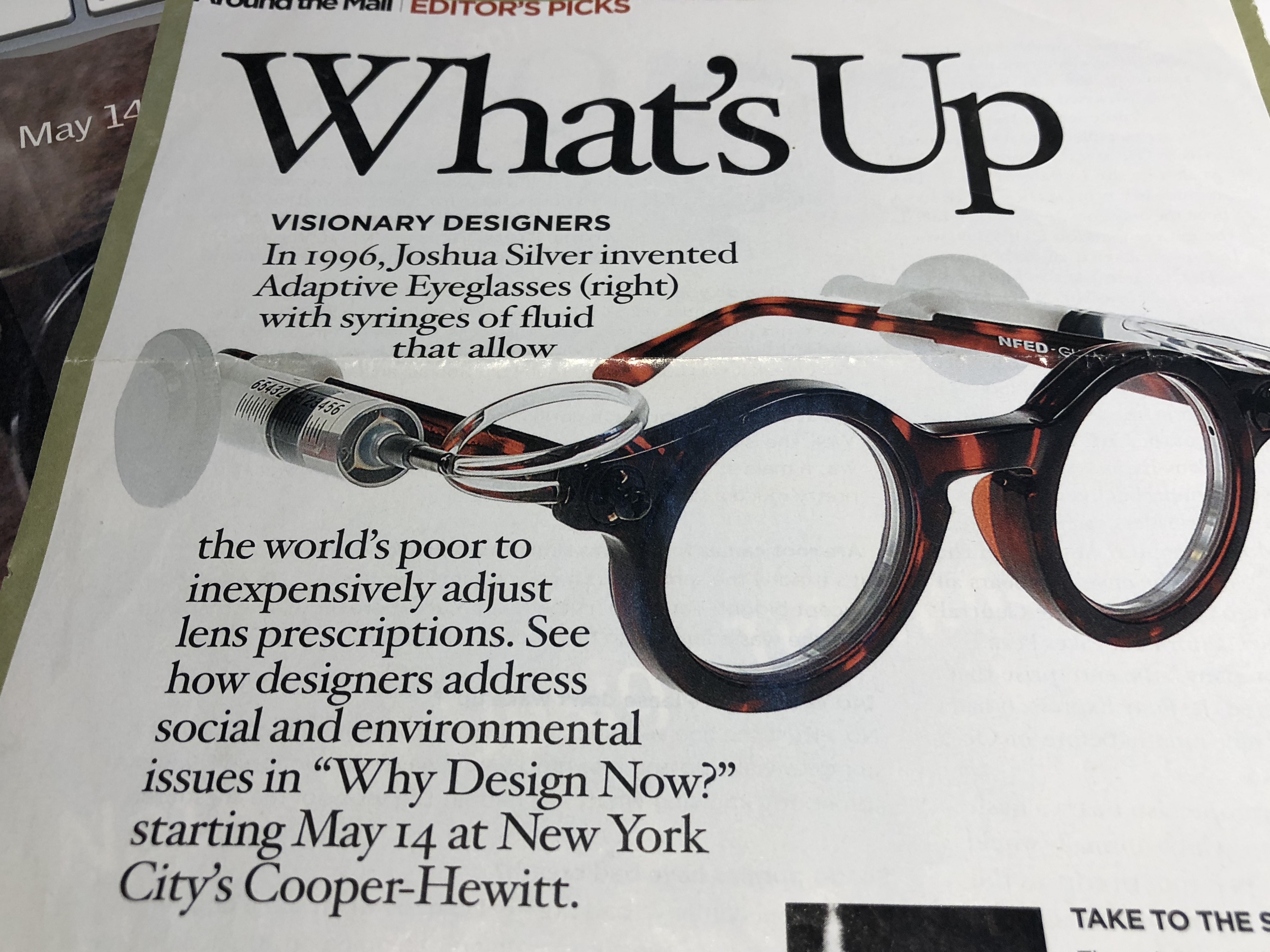 And what may be the most fun of all, Emily Pilloton’s Book “Design Revolution” highlighted designs that were good for humanitarian needs as well as the planet. Josh’s Eyeglasses were one of the designs and Ms. Pilloton made it to the opening of the Smithsonian’s exhibit as well as making an appearance on the Stephen Colbert Show. She brought three of the one hundred products from the book to showcase. You guessed it, self adjustable eyeglasses made the cut. Watch Stephen Colbert put them on here:

The rest is, as they say, history….or is it just the beginning?

Over the years of working with eyeglasses distribution in low resourced areas it became abundantly clear that both the liquid silicon eyeglasses and any of the designs of Alvarez lenses (based off of American Nobel Prize winning physicist Louis Alvarez https://en.wikipedia.org/wiki/Luis_Walter_Alvarez) had drawbacks. Kevin’s aha moment was when he determined that combining the technological approach of self refraction with a pair of conventional eyeglasses was the only way to end the epidemic of bad eyesight with an acceptable product at the right price. He drew up the USee on a legal pad in fall of 2013 and got to work.

In the big picture, these past five years are but a small blip in what will be the story of prescription eyeglasses distribution to the developing world. Eyeglasses have been around for nearly 700 years or so, they are ubiquitous in every developed nation where access is abundant, and knowledge of their need is evident. That simply is not the case elsewhere and the story of how a small consortium of organizations is working to eradicate preventable vision problems is profound.

An important part of that story is Global Vision 2020 located in the heart of Easton, MD, right across the street from the historic court house and the statue of Fredrick Douglass, a fellow Talbot County local we can look to daily for inspiration. 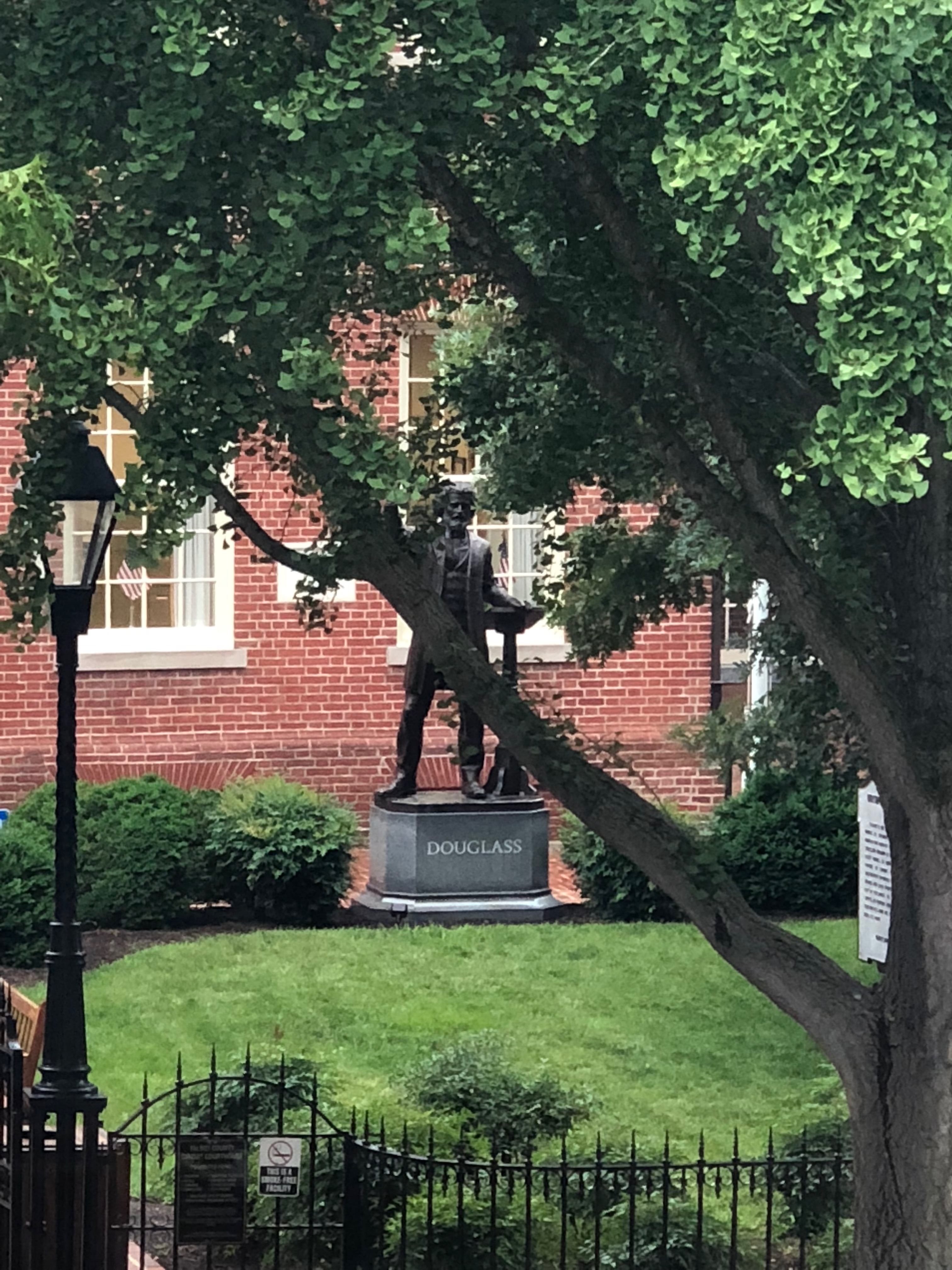 As we look at both the history and future of self-refraction we can confidently say Global Vision has the device to provide glasses to the billions of people that need them. From idea, to inception, to design, to R&D and clinical trials these products of self refraction are globally impactful.

We are proud of our mission, location and history. And we are delighted that our work in this field has given us the opportunity to build a small collection of artifacts that showcase the story we think will change the world, one pair of eyeglasses at a time.

We welcome your visit. 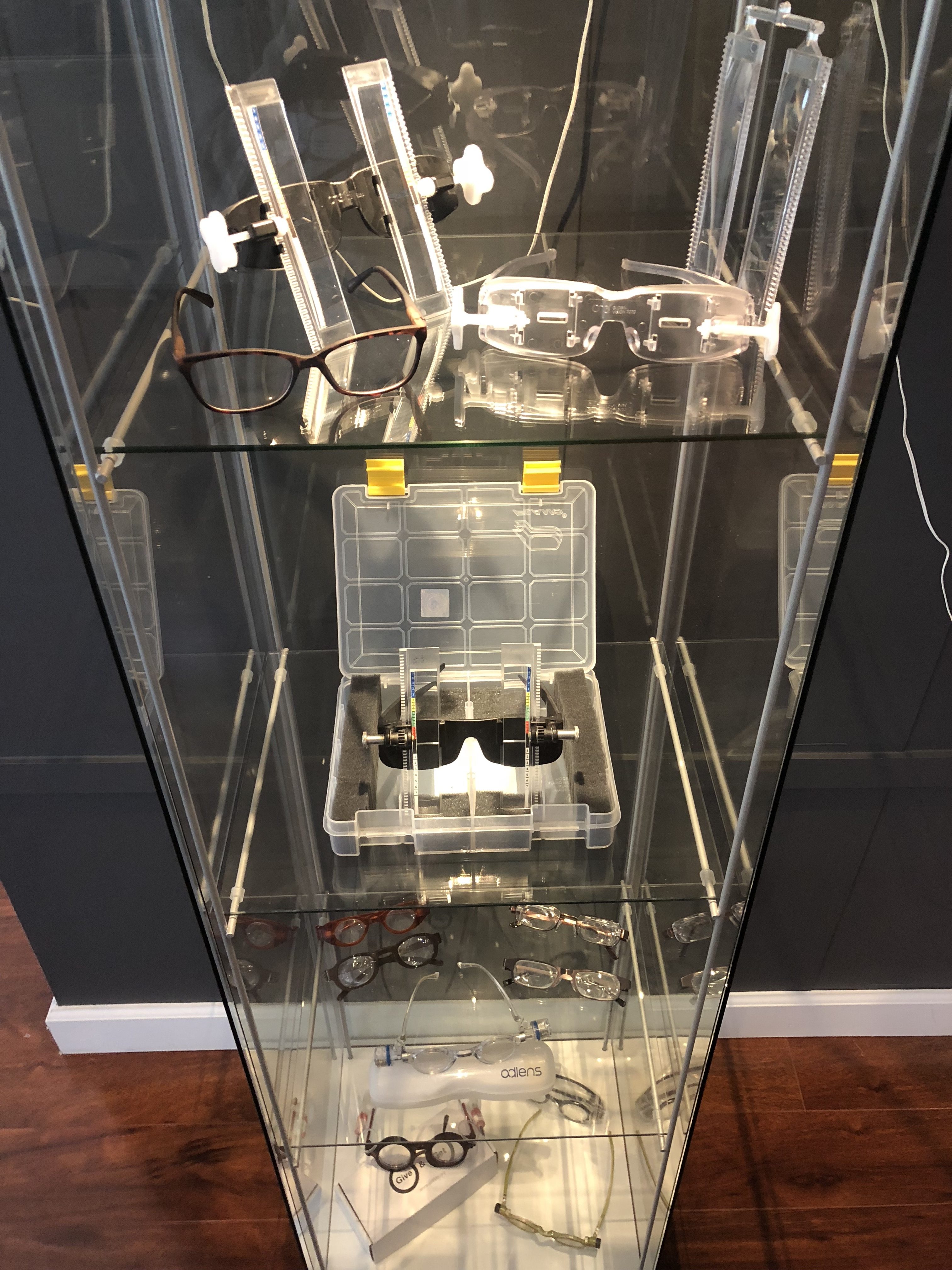